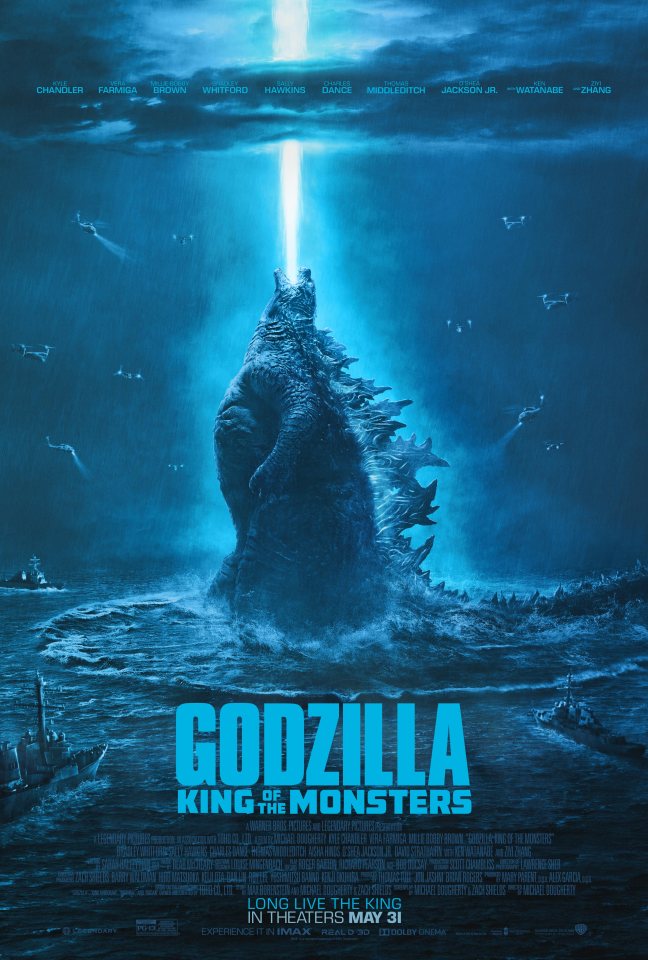 So, when I started writing my review of 2019’s Godzilla: King of the Monsters, I had difficulty. It wasn’t that I didn’t have anything to say (I can always find an excuse to share my opinion), it was that the conversation around the film changed so rapidly. I’m part of several Godzilla fan groups on social media and almost overnight I saw the tone of the conversation shift from eager excitement to guarded, sometimes pointed defense of the film. The reason? Actually – there are 177 of them. As of the time of this writing, that is the amount of negative critical reviews present of Godzilla: King of the Monsters on Rotten Tomatoes.

Like many Godzilla fans, I want to see the big guy succeed. Why? Because – as long as Godzilla is profitable, they will continue to make Godzilla films. Since I can’t get enough of those, that sounds awesome to me. At the time of this writing, Godzilla: King of the Monsters has made $341,972,017  worldwide at the box office, off of a budget of roughly $170-200 million. Even factoring in another $100 for marketing (which would be excessive), the film has turned a profit.

So yay! Mission accomplished! Why are some people on the Godzilla fan groups still so angry? A large part of it is continued attacks against film critics, many of whom are accused of bias or just “not understanding” what makes a good Godzilla film. The generic answer appears to be this:

It’s a simple version. One of the largest complaints against Gareth Edwards’ 2014 Godzilla was a lack of… well, Godzilla. Many felt the titular monster was too much of a no-show in his own movie, surpassed by the Mutohs and human drama of the movie. Personally, I would agree with this somewhat. However, that’s just like…my opinion, man.

I want to use  this post as a call to my fellow Godzilla fans: Don’t try to establish a concrete “objective” criteria for “good” Godzilla movies. They don’t exist. Movies are art and art is subjective. The fact that Godzilla: King of the Monsters had more monster action than its predecessor does not automatically make it a better Godzilla film.

Case in point: Godzilla’s Revenge. Many Godzilla fans hate this movie (personally, I kinda like it).  But how could they? It’s full of monster fights! In fact, at least three major monster battles happen in Godzilla’s Revenge. Compare that to the one of the previous film, Destroy All Monsters. Yet, Destroy All Monsters is more universally loved – how did that happen?

Well, some Godzilla fans might say, it’s because Godzilla’s Revenge is too kiddy. Destroy All Monsters is more serious! Really, the movie about Earth battling living rock aliens is more serious than the film about a lonely little boy escaping into fantasy to have friends?

My point is this: It’s subjective. I say this as the person who headed a joke panel at G-Fest called “Objectively the Best Godzilla Movie EVER.” There is no clear criteria for judging Godzilla movies.

Keep Conspiracies out of Godzilla Fandom

Personally, I thought King of the Monsters was fine. I didn’t love it, but I didn’t hate it either. Do I wish that critics had been a little less harsh? Absolutely. But they’re going by an established logic. Yes, there are a ton of human characters in the film – do most of them have complete arcs? Not really. Is there a lot of dialogue that serves as exposition – both for monster and human motive? Yep.

Does the film have ideas that perhaps aren’t as explored as they could be? Yeah, I guess. Is the film more than two hours long when it perhaps didn’t need to be – I would argue that yes, yes it is. All of these reasons and more are enough to dislike a film. While I personally don’t share these views, I can understand them. It’s a realistic scenario.

What’s not realistic to me is the idea that Rotten Tomatoes is a vast conspiracy to help out certain movies and destroy others. That, frankly, is nonsense. 177 critics on professional and amateur film review sites did not like the movie. Do you know how hard it would be to coordinate that? Forget having a motive – it would be a nightmare. Planning things with more than two people is difficult (I should know, I’m planning a wedding right now – as well as another G-Fest panel). Planning things with hundreds is…well, it’s more fantastical than a dozen giant monsters fighting super advanced rock aliens from somewhere near Jupiter.

Apart from all of this: Rotten Tomatoes is not itself a critic. It’s just the website that wrangles together all the reviews and presents them in a way that may produce a clearer image of just how well a film was received. Do they have any preference to films? Not that I’ve seen.

What about Disney? You ask. I respond with: Aladdin (2019) sits at 57% currently (rotten) and Dumbo (2019) is 47% (also rotten). What about favoring progressive movies? One – who says Godzilla: King of the Monsters doesn’t have progressive messages? Two – gender-reclaiming film Ophelia is currently at 58% (rotten) and Men in Black: International – a film that apparently started out as a commentary on immigration – is at 24%.

Point being: Until someone can find concrete proof that Rotten Tomatoes is paying critics to vote a certain way – please stop attacking the messenger. It’s just the way it worked out guys – critics were, overall, not a fan of Godzilla: King of the Monsters.

Stay Away from “Gatekeeping”

The big thing I’m worried about coming from this anger is gatekeeping. I don’t mean Godzilla fans are going to start guarding fences – at least in the literal sense. Gatekeeping in fandoms refers to fans attempting to say or control who really is a “fan” and who is not. For example, let’s say someone sees King of the Monsters and hates it. But they’ve never seen another Godzilla movie – ever. So they make comments like “Who even is this stupid moth” or something like that.

An angry fan lashes out – personally attacking the critic for not knowing anything and saying their opinion is meaningless or stupid because they’re not a “fan.” Unfortunately, a lot of gatekeeping is driven by sexism (some people still have the idea that female gamers are faking it).

But, despite not having seen another Godzilla film ever, this person’s opinion is still valid. They are allowed to hate King of the Monsters. They are allowed to not understand Mothra. Heck, I’m not sure I would understand Mothra if I’d only seen that movie. Likewise, someone who watches Godzilla films and judges the human plots can still be a fan. It’s not all about monster fights or explosions or aliens.

I know I’m ranting but I just hate this ugly side of fandom. I don’t want to see it in Godzilla. Part of the reason that I love being a Godzilla fan is how accepting the culture generally is. It’s always a treat to go to G-Fest and see so many different people united by our love of Godzilla. We don’t agree on what’s the best movie or best monster. We don’t even agree on what’s the best part of the Godzilla series – but we love it all the same.

That is worth preserving. That is, hopefully, worth this rant. If you haven’t seen Godzilla: King of the Monsters – please go check it out. I’m sorry if you hate it. There’s still 34 other movies out there (35 by the end of 2020).