Predator 2 has it rough. At 29% on Rotten Tomatoes, it is the lowest reviewed of the Predator series (still higher than the two Alien vs. Predator movies though, so there’s that). For the record, I think it’s a little underrated. Yeah, it’s far from a great movie but it’s enjoyable popcorn once you get past the mundane first act. One thing I think Predator 2 does really well is world-building. In fact, I’d say that, of all the Predator sequels, Predator 2 expands and builds on the series mythology the best.

The Predator as James Bond

One of the things I don’t like about Predators and The Predator is what I call a misreading of the Predator franchise. According to Predators producer Robert Rodriguez stated that the title was mention to reference Aliens, the second film in the…well the Alien series. It seems Predators took more than just the idea for a title when it came to that film. Like in Aliens, Predators introduces its audience to a new breed of Predator, something bigger and stronger than what came before. They’re not queens but they do seem to be divas.

For me, that’s just not super interesting. Instead, I see the Predator as a James Bond type. Now, what do I mean by that? No, I’m not calling the Predator suave and with a face like that I don’t think he drowns in women. In almost every James Bond movie, however, it’s about the gadgets.

I think all Predator sequels should have a similar component – and Predator 2 does an excellent job of expanding the gadgets. In addition to the shoulder canon and the wrist blades, we now have a spear, a net gun, a death Frisbee  – a lot of cool new stuff with which the Predator can cause mayhem. This inventory has become Predator canon and appeared in practically every sequel sense. 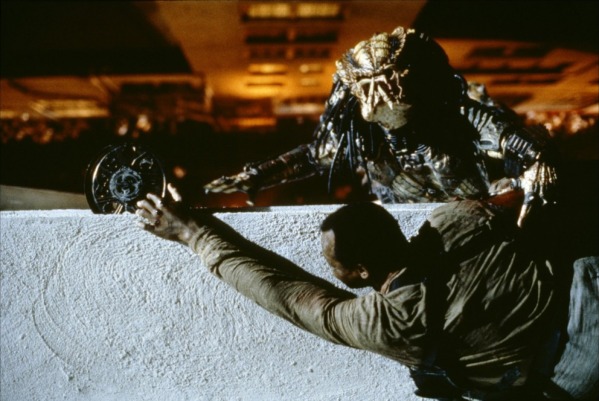 It helps expand the lore of this trophy-hunting alien race, to know that – like Americans – they have a lot of gadgets that they use to stalk less advanced creatures.

The Skull that Changed a Fandom

When we talk about world-building in Predator 2, we have to acknowledge one scene in particular. This one: 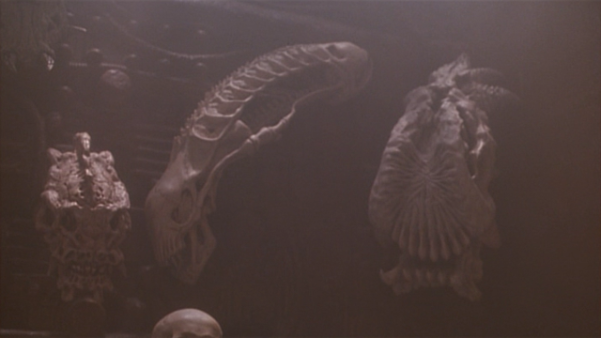 With just one quick shot, Predator 2 opened the world up to an incredible crossover possibility. Yes, aliens and predators exist in the same universe and yes, they fight. It does this without any dialogue and without really even wasting a scene, as our protagonist is interested in a human skull, which is part of the display.

A lot of movies attempt to build cinematic universes these days. Heck, The Mummy (2017) stopped its plot cold for roughly twenty minutes just to do what Predator 2 did in a couple seconds. Sometimes less is more, and this quick scene in Predator 2 is a fantastic example of passive world-building. Now, if only Disney can make a movie that finally capitalizes on the potential of this sequence.

Predators Through the Ages

The final sequence of Predator 2 features what I like to call a “Harry and the Hendersons moment.” A whole predator family emerges from the shadows to retrieve their comrade, one by one vanishing back into the mist after they’ve accomplished their task. After this happens, the chieftain (another great example of world-building) hands our protagonist a revolver from 1715.

Okay, so the audience is learning a lot here. Not only do we get a glimpse of a predator society – complete with hierarchy and honor code – we now understand that they’ve been doing this for hundreds of years, perhaps longer.

Maybe I’m alone in this but I would love to see something of these other predator events throughout history. You seriously telling me you wouldn’t see ninjas fight predators in feudal Japan or watch one of these guys go toe-to-toe with vikings? Yeah, at first glance it doesn’t seem fair but remember: gadgets. Perhaps earlier predators used different weapons to keep the hunt interesting.

The Advantages of Passive World-Building

Remember how I just said we got a lot of information? Well, watch that video again and count the lines of dialogue. There’s not much and what’s there is not exposition. Exposition, for those who don’t know, means dialogue that exists to explain. It’s every common in every storytelling medium. Predator 2 has a lot of it in the scene where the feds are explaining to the protagonist what the predator is.

Unfortunately, exposition can go wrong a lot of ways. Case in point: When the feds explain the predator to the protagonist, the audience already knows much of the information – pretty much everything interesting. This is Predator 2 after all, we’ve already had one super alien come down from the sky and hunt people.

But, while that particular scene is bad, Predator 2 is full of examples of world-building without exposition. There’s no “Oh it’s a spear! Haven’t seen that before!” or “Look at the skulls, this thing has been fighting aliens from everywhere!” or even “That must be the chief!”

Exposition isn’t in itself bad, but it’s almost always more clever to make your world-building more passive, unless it’s a central part of your story’s plot. So many stories – especially those in fantasy – weigh down their dialogue with explanations of things that are either:

Most times, writers are all too eager to talk about the amazing world they’ve created, even at the expense of their narrative. Predator 2 is a film with a lot of problems but – when it comes to world-building, it pretty much nails it at every turn. In this aspect, I believe it is the best of the current Predator film franchise.