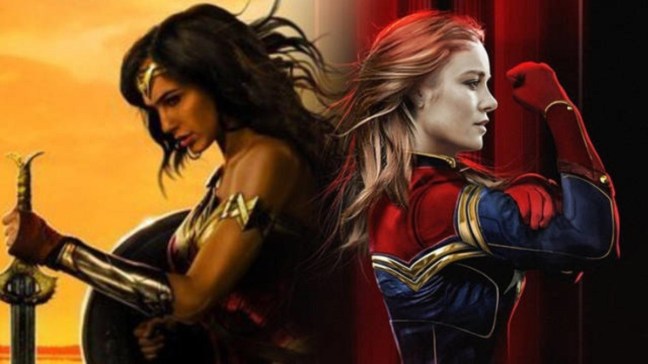 First there was Wonder Woman, now Captain Marvel. Can America survive with two leading female superheros? According to certain (and probably mostly robotic) members of the internet – our civilization will never be the same. For the rest of us – neat! I just saw Captain Marvel and wanted to write about how it compares to Wonder Woman, at least in terms of writing. There are so few female-driven superhero films, and even less that have been written and directed by women, that I found this to be a compelling topic.

For the record, this is not a “which one was better” article. I’m not Marvel vs. DC – I actually hate fanboy culture in general. I liked both movies. I encourage you to watch both, if for no other reason than to see how female-led superhero movies are constructed in the early 21st century.

How Wonder Woman and Captain Marvel are Alike

First off, let’s talk similarities. Being in the same genre – it was only natural that Captain Marvel and Wonder Woman have some things in common. For instance, both of our protagonists have superhuman abilities. They both face a superhuman threat, one that threatens not just them but humanity as a whole. Both have a cast of culturally/racially diverse cast of supporting characters. And (surprise) both triumph at the end of the day, learning that the true strength was inside them all along.

Standard stuff. But let’s break it down a little more:

Okay, remember that superhuman threat? Well – the similarities actually go a bit deeper than that. Stop me if you’ve heard this one: Trusted adviser/mentor turns out to be evil genius!

Oh – you’ve heard it? You must have seen either Wonder Woman or Captain Marvel. Whether it’s Patrick Morgan or Yon-Rogg, these heroes just can’t trust the people closest to them. In Captain Marvel‘s case, the relationship is a lot closer. Yon-Rogg was her teacher for six years. Diana only knew Morgan for a few days. In both scenarios, however, the villain pretended to be in the hero’s corner, claiming to be for empowering her while really furthering ulterior motives.

While two movies does not dictate a trend, I feel it is safe to say that – given today’s social climate – this villain choice might be a reflection on society. There are many “nice guys” out there who are anything but. Captain Marvel is a lot less subtle here. In the finale, Yon-Rogg continues to claim to be for empowering Carol Danvers, all while setting a slanted expectation that only benefits him.

In short, he keeps telling her that she’s only worthy if she can beat him without using her powers. Funny how he didn’t hold this standard of fairness when he and his team surrounded and imprisoned her just a few short minutes beforehand.

Likewise, Morgan (read Ares) was all for Diana doing whatever she wanted, until what she wanted went against his wishes. These guys are literal definitions of double-standards.

The Battle Against Toxic Masculinity

What I’m trying to say is – in both films, the main antagonist is a message against toxic masculinity. But the movies don’t stop there. Both films are full of direct and indirect messages against the sexist teachings that have penetrated modern culture. For instance, neither film features a shot that glorifies the “male gaze.”

For those who don’t know, a “male gaze” refers to viewing sexuality only through a (straight) male lens. In the case of women characters, it leads to a lot of women bending over, exposing midriffs, and generally wearing less clothes than is reasonable for the given situation. You’ve likely also seen a lot more breasts and vaginas in movies than you have penises. All of that is part of the “male gaze.”

Both Wonder Woman and Captain Marvel reject this idea, instead giving us heroes who are sensibly clad and slow-motion shots that showcase the action, not the protagonists’ “physical attributes.”

Each film also shows a rejection of traditional gender roles. In Wonder Woman, Diana is continually horrified at how little power/agency the women of England have. In Captain Marvel, Carol is constantly pushing against a system that tells her she’s not as good just because she is a woman.

Finally (and importantly), both films provide alternatives to toxic masculinity in the characters of Steve Trevor and Nick Fury. Each of these men work alongside the powerful woman rather than feeling threatened by her. This shows the potential of a future where men and women can work together in equality, no matter who takes the lead.

This, along with the clear nature of Carol and Diana, ushers in a message of empowerment. While these films are aiming the message at women, the idea is a universal one: Don’t let a system tell you who you are because of what you are. In today’s world, this is a good message – for everybody. Still, I don’t want to take away from the significance for women.

In an age of seemingly never-ending superhero movies, it’s nice to at least have a couple that say “hey, women can do this too.”

I wish I could say the similarities between these films was all positive…but I subjectively can’t. Personally, I found that both Wonder Woman and Captain Marvel struggle in their third acts. Now, this is for different reasons.

In Wonder Woman, a film set during World War I, it was really disappointing to follow this scene:

With one that essentially says: “JK – it was one guy and it’s the dude from Harry Potter.” Wonder Woman was doing such a great job of handling the complexity of World War I – a horrible, senseless war without a true villain – before it undercut it with a villain…and had a really unnecessary effects-driven final battle sequence.

In Captain Marvel, Carol unlocks her true powers – making her by far the strongest character in the movie…and then she doesn’t really do much with them? We kinda just knocks her old team around. She does blow up a ship – that’s cool. But, for an ending about letting go of limitations, it all felt strangely restrained (and poorly filmed). Yon-Rogg was moving around a lot for a guy getting his butt whooped (how did he even escape to get down to Earth?).

To be fair, this problem is not unique to these two superhero movies. Virtually every other superhero film is plagued by a restrictive set of expectations for the third act, one that says toss out the theme of the film in favor of an action sequence. Even Black Panther suffered from this problem – going from a masterpiece on institutional racism to an overblown set piece filled with CGI rhinos.

Strangely, only one superhero film has not used this trope – and even made fun of it – and it was a film made over 10 years ago:

“You didn’t think I’d risk losing the battle for Gotham’s soul in a fist-fight with you?” This is a brilliant line. Here’s hoping Wonder Woman 1984 and the inevitable Captain Marvel 2 can follow The Dark Knight and break fully free of their superhero confines.

Anyway, while Captain Marvel and Wonder Woman are similar, there are obviously many differences. One has aliens, one has germans. There’s only a cat in one…I think? But more importantly – there are two key differences I want to focus on:

Captain Marvel has no romance and this is great for two reasons. One, it is a blessed change from the Marvel formula that stipulates a love interest in the hero origin film who will ultimately be written out in later movies. Two, it’s refreshing to see a female hero (really any hero) who is on her own.

There’s no inversion of gender roles (unlike Wonder Woman) where Carol drags along an under-powered man who she has to continually save/support. There’s no “true love opened her eyes” messaging.

I’m not dissing the love story in Wonder Woman – it’s fine. But I’m grateful Marvel felt Carol could stand truly on her own…at least til she falls for some hero in a sequel (remember that time they made Black Widow and Hulk date?).

The Freedom of Wonder Woman

However, there is an even bigger difference in the film and that ties into the approaches from the studio. While both films were intended to be prequels, Wonder Woman threw off these limitations in favor of telling its own story. By the end of the film, it was clear we weren’t watching Snyder’s Diana, the moping princess who did nothing for 80 years because her boyfriend died. In Patty Jenkins’ film, we watched the birth of a hero, one who would always do the right thing – even when it was unbearably difficult.

Captain Marvel unfortunately does not have that much power. It is the 21st film in the Marvel Cinematic Universe – so Carol must conveniently disappear for the events of the other 20. She’s in the game now but still – it’s kinda weird how this living god had so little important on the greater story until now. At the end of the movie, Carol is off to the other side of the galaxy, while Fury is really the only human (apart from a couple friends) who even knows of Carol’s existence.

At least it makes sense that he’d keep it to himself. As Iron Man said: “Even his secrets have secrets.”

So there you have it – a brief look at our two current leading female superhero origin story films. Here’s hoping that, in a few years, articles like this will be harder – since it won’t be as uncommon to have a female-directed, female-lead superhero movie. Heck, maybe one day we’ll even let a woman direct a male-led superhero movie…but perhaps I hope too much.