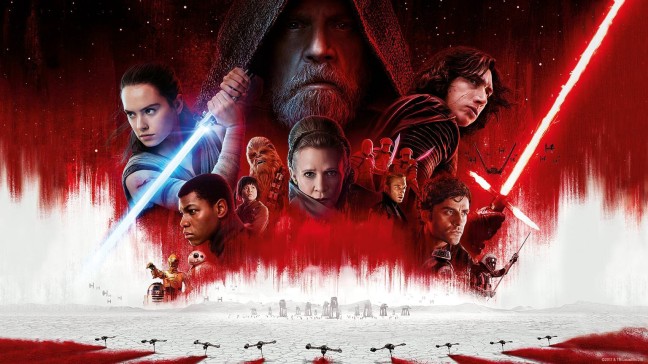 Star Wars: The Last Jedi came out in theaters six months ago and the impact of its release is still being felt. To say the film is controversial appears to be an understatement. Some claim it is the death of Star Wars, a film worse than all the prequels (really?) that shreds the source material. To others, including myself, it is a breath of fresh air and maybe the first true Star Wars “sequel” in quite some time.

One of the main reasons that I love Last Jedi is that the movie generates conversation. I saw Solo last week and am already forgetting it. It wasn’t a terrible film by any stretch, nor was it really good. Solo just exists, checking off all the boxes it has to without feeling particularly inspired or warranted. I feel like there was no deeper subtext or character development. Spoilers: Han Solo is a scoundrel but a good guy. Did I really need to spend $16 just to confirm that?

With Last Jedi, I felt like I was watching a movie that wasn’t content to simply check boxes. It didn’t care that it was a “Star Wars film” and spent more time trying to be a genuine movie. The result is an experience that gives me something new every time I watch it. Here are some of the thoughts and readings I’ve had while watching Rian Johnson’s Star Wars: The Last Jedi:

I know, shocker right – that Luke S. could mean Lucas? Watching Mark Hamill in Last Jedi is fantastic. True to the series’ Kurosawa roots, Luke is no longer the bright-eyed boy on Tatooine but a grizzled, jaded Jedi master. Unlike Harrison Ford’s Han Solo from The Force Awakens, Hamill’s Luke feels different from when we last saw him. His character has been appropriately aged along with himself.

When I was last watching the movie, I paid attention to Luke’s dialogue – in particular his self-loathing. Luke Skywalker did the impossible, he redeemed Darth Vader. Bear in mind, Luke is still fairly young in Return of the Jedi – at most 30. It’s not everyone who saves the galaxy before they can even qualify for a midlife crisis.

Therefore, it’s easy to see how Luke made mistakes. In his hubris, he felt he could do anything after that. It’s a very human reaction. Some would say it’s exactly what happened to Star Wars creator George Lucas after he made the original trilogy.

The struggles of George Lucas in making Star Wars have been widely documented. He had to fight on every decision and ultimately had to shoulder more than his share of the work. Lucas saw someone few people did, perhaps that nobody else did: that Star Wars could be a hit. And he did it. When everyone doubted, George Lucas did it. The man created a property that has impacted the lives of millions and created a devote following (to say the least).

To quote Hamill’s Luke from Last Jedi: he “became a legend.”

Then the time came for George to duplicate his massive success. The year was 1999 and the world was hungry for Star Wars Episode I: The Phantom Menace. Then the movie, and its two sequels came out and…well…lighting did not strike twice. With the introduction of characters like Jar Jar Binks and concepts like midichlorians, many fans thought that Lucas was destroying his creation and tarnishing his legacy.

And not to mention the Special Editions that are widely held as inferior to the original theatrical cuts. On all fronts, it seemed like George Lucas could do no right. Yet still he forged ahead. Why? Because he was George Lucas…a legend.

Until, one day, older and definitely with some bitterness, George Lucas sold Star Wars and retired to his home, essentially becoming a grizzled old hermit himself and completing the character arch that he envisioned for so many of his Jedi heroes.

Did Rian Johnson write Luke S. as a metaphor for Lucas? Who knows. But the similarities are uncanny.

When I first wrote my article declaring Kylo Ren a Star Wars fanboy, I had no idea how right I’d be. In a movie script obsessed with subverting history, Kylo Ren is the character most consumed by it (even more than lonely Luke). Despite his vocal claims to the contrary, Ren cannot let go of the past.

He sees himself as the central figure in the story, a view he asserts on Rey in the following line:

“You have no place in this story; you come from nothing. You’re nothing.”

Charming. Such a wonder why Rey promptly runs away after that exchange. Kylo Ren’s delusions of grandeur aside, his character typifies the negative perception that Star Wars fans feel they “own the trilogy” more than anyone else. This belief (to varying extents) was represented in the documentary, The People vs George Lucas where the filmmakers made the argument that fans owned Star Wars more than its creator.

The story of Star Wars has become so ingrained in pop culture that most everyone knows at least the basics. The heroic Skywalker stands at the center of the galaxy, reshaping it in his image. For both Luke and Vader, this perspective holds weight and no doubt Kylo Ren sees himself as simply a continuation.

He knows how the story will go, how could he not? He believes himself to be the main character. This fits with a large viewpoint in the Star Wars fandom that family lineage matters. Even in the Expanded Universe, the focus was largely on Luke, Han and Leia – not to mention all of their children and spouses.

This idea runs so counter-intuitive to the message of the original film, which showed that heroes could come from anywhere – even a nowhere like Tatooine. Kylo Ren has done very little to declare himself a hero, yet he still clearly sees himself as one.

His expectations and actions based around how he believes the “story” will go reflects the controlling nature of fandom. The cry for newness while wallowing in the familiar. Kylo Ren must be the hero because…well, that’s how he wrote it in his head.

The toxic masculinity of Poe Dameron

When I first saw The Last Jedi, I had problems with Poe Dameron’s subplot. Specifically, I didn’t understand why Admiral Holdo didn’t just tell him the plan. Was she worried about a spy? Was it subversion just for subversion’s sake?

Since then, I’ve noticed quite a few things in Poe Dameron’s dialogue. Holy hell, is he an asshole. Never mind that he gets nearly the whole bomber fleet killed at the beginning of the movie (an action which gets him justifiably demoted), he refuses to treat Holdo with respect.

His first “not what I expected” conveys a personal disappointment. The feared military hero, Vice Admiral Holdo, is nothing more than a skinny, older, soft-spoken woman who doesn’t convey bravado or really anything. She just sets about doing her job.

Poe: “Vice admiral? Commander Dameron. With our fuel consumption there’s a very limited amount of time that we can stay out of range of those star destroyers.”

Holdo: “Very kind of you to make me aware.”

Yes, because there is no way that the Vice Admiral of the Resistance fleet already understood the very basic situation. If you’ve ever wondered what “mansplaining” is – this is an example. Poe, who was recently demoted for screwing up royally, still feels entitled to assert himself.

His lack of faith in his superior officers translates into a loss of hope and a dangerous turn that gets more people killed. The First Order learns of the rebel plan partly through Poe’s actions.

Remove the fact that Holdo is a woman and treat it like a standard military operation: A demoted officer immediately undermines his superior’s orders because he feels left out. Granted, we never see if Holdo tells anyone the plan because we’re confined to Poe’s view point.

We see him rebel again and again, not to further any real cause but his own desire for control. It is a subplot that I did not fully pick up on the first time through – mainly because I was so surprised to find it in a film like this.

One last point I want to make before I wrap this article up. When I saw Force Awakens, I didn’t have to think about my least favorite characters: Supreme Leader Snoke and General Hux. Snoke, despite the performance of Andy Serkis, came off as Emperor Palpatine 2 – a character who served the story because, well, it’s a Star Wars movie and those need a creepy old dude in a chair.

Hux, by contrast, had the personality of an evil brick. I had no sense of these people as characters, merely as roles. Snoke was the leader and Hux was a general. Got it. Last Jedi greatly improves this without taking serious script time and Johnson does it through visual storytelling.

First, Snoke: Look at that robe! Who wears a fabulous glitter gold robe complete with slippers while overseeing a military operation? Someone who is very arrogant and very much in control – a.k.a. the dear Supreme Leader. By the simplest wardrobe change, Snoke takes on some of his own character and becomes less of a Palpatine clone.

Hux, by contrast, has more of his characters conveyed through his unspoken actions. Whether it is the smug sneer he gives Kylo Ren at the start of the film or when he almost pulls a gun on Ren’s unconscious body, the audience understands the relationship between these two characters. No one ever blurts “power struggle” because they don’t have to.

This dynamic gives Hux depth and informs us better of his character.

There’s more to say on Last Jedi but I’ll save it for another day. Suffice it to say, I feel strongly about this movie and I hope Episode IX can live up to its fine example. I’m genuinely sorry for the other Star Wars fans who saw this film and thought it was the worse thing since Jar Jar – but I implore them to give it another go. No, it’s not what you were expecting – but that’s okay. This film still has a heart and, more importantly (at least to me) it has a mind clearly present in its script.