If you’re from the eighties or nineties, odds are that you’ve seen the Back to the Future trilogy. They’re awesome films filled with memorable characters and quotable lines. The first of the trilogy, the original Back to the Future, was released in (you guessed it) 1985 with the two sequels coming in 1989 and 1990 respectively. Wow, those sequels sure got pumped out quickly. There’s a simple explanation for that: they were shot back-to-back. This is not the only time such a technique has been done. Other examples include the Pirates of the Caribbean films (two and three were shot back-to-back, we’ll talk about those another time) and The Matrix (two and three shot back-to-back). The most famous example is obviously The Lord of the Rings where all three films were shot one at the same time. Anyway, let’s talk a bit more about theses Back to the Future sequels.

They were not made for the story. Director Robert Zemeckis is on record as saying that the original film was not envisioned with sequels in mind. Pretty obvious really, despite the film’s classic cliffhanger ending. Back to the Future is a quirky family comedy built around the mechanic of time travel and what it would be like to see your parents in their teen years (turns out it’s really disturbing). That’s great material for a single movie but doesn’t work so well stretched into three. Good thing they didn’t do that. The sequels have their own moral lesson that is spread over the two films and that is: a person chooses their own future. A lesser moral lesson is don’t mess with time travel.

Yet whenever there are unplanned sequels (that happen due to a studios financial desires over a director’s creative ones), the writing always takes a hit. Characters get deeper, they have more emotional traits than we’ve seen before (and not always for the better). Plots can get needlessly convoluted and interesting aspects of the original run the risk of feeling tired after three movies. Casting problems can also drastically effect shooting (for better or for worse). The Back to the Future trilogy suffers from all four of these afflictions.

Let’s start with Marty. As my title implies, he develops a pretty serious character flaw. Mainly, calling him chicken is the key to getting him to do literally anything. From fighting to drag racing, there is nothing Marty McFly won’t do if someone (doesn’t really seem to matter who) calls him chicken. The problem: Marty looks really stupid. Seriously, the person didn’t even swear at him and he flies off into a completely unrealistic and cartoonish reaction. This is a strong departure from the Marty McFly of the first film who essentially played the straight man (comedy term) in a world that’s gone topsy-turvy. That Marty was identifiable and likeable.

In the sequels, the audience is expected to still feel those emotions for Marty, who in the future is a ruined wreck of former ambitions. What happened to screw his life up? Somebody called him chicken… so Marty recklessly raced him and got into a major car accident. It’s like asking someone to feel sorry for Aaron Hernandez right now. Yeah something bad happened, but the character totally deserved it. (I do not mean to accuse Marty McFly of something as serious as murder, he may be an idiot but at least he’s not a psycho) There is no sign of this trait in the first movie. Granted, no one calls him “chicken” but to have such a complex would warrant additional bizarre behavior. Like I said before: Marty is the normal guy in Back to the Future.

So that didn’t work out so great for the sequels. Another problem (and on this one the movies themselves agree with me): don’t mess with time travel. Any writer will tell you this. Unless every aspect of plot has been painstakingly thought out, there will be problems. Even in the first film – not everything makes sense. It’s okay then because the plot is never grievously affected. Let’s look at Back to the Future Part II. 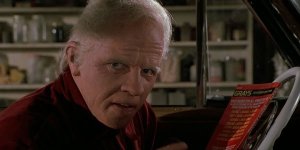 Old Biff and the time machine. He takes it, that’s fine. How Doc and Marty get it back? Biff returns to the current future timeline (the one that Doc and Marty are in) despite the fact he has just radically altered past events. I know: it’s a movie. But this movie draws attention to the concept of its timeline in a later scene.

Right there, Doc is saying that old Biff created a new timeline in the past. So how was he able to return to the old one? Come to think of it, the plot in Back to the Future Part II feels the weakest of the three movies. Sure there’s the cool future scenes but those are sadly over and done with in about twenty minutes. Then there’s a brief stint in a hellish nightmare version of 1985 (also interesting) before the finale returns to (at this point worn out) 1955. That’s two movies about time travel that center the bulk of their story in the same year. The audience saw 1955 in the first movie, they didn’t need to see it again.

There is an explanation for this. Really simple one too:

Crispin Glover did not return to reprise the role of George McFly. They wanted him to – it wasn’t a writing choice. It was a financial one. When Glover could not return, Back to the Future Part II was rewritten to largely remove his character. So, because of the casting department, no one out there will ever know what the original plan for the sequel would have been. It’s really too bad as Glover is such a presence in the first film and is missed in the other two. Michael J. Fox and Christopher Lloyd are great, don’t get me wrong, but Glover is arguably the third best actor in the first movie. He is missed in the two sequels. Also missing: 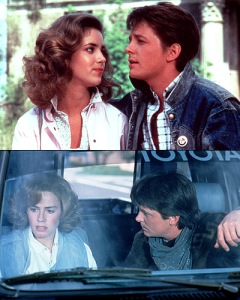 This was a problem of a different sort. The original Jennifer (Claudia Wells) could not return to the sequels for personal reasons. The role was recast with Elisabeth Shue filling her shoes. The problem: Shue is not a great actor. She doesn’t have a lot of presence or comedic timing. Really, one can’t be sure if Wells would have been better but Jennifer was a much smaller role in the first movie. As they had to recast anyway, don’t you wish they could have gotten someone a little better?

Oh, and not to leave Back to the Future Part III free of criticism. The sole reason the old west was chosen for the setting was because Michael J. Fox thought it would be cool. Turns out he was right. That’s not the criticism, this is: 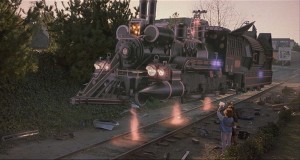 Remember that whole moral lesson that time travel was bad? Doc was the one preaching it. Frequently in the two sequels, Doc outlines his plan to fix things and destroy the time machine. Yet at the end of the trilogy, what does he do? He builds another time machine. Don’t worry, this time it’s a flying train so it’s so much less conspicuous than a delorean. This action completely flies in the face of the Doc character that the sequels have been establishing. It creates a confusing ending that only makes sense if…

Yeah, they were leaving the door open for Back to the Future Part IV. It never happened. Still, this is what happens when things are done solely for dollars. Everything else is sacrificed to produce cash revenue. For the record: I really like the Back to the Future trilogy. I grew up with it and, despite the plot holes and other logic gaps, I find them to be funny and entertaining movies. That’s the most important thing. They still work. It’s just sad they were made for the dollar first.

Thoughts? Comments? Am I full of it or onto something? Let me know now in the feedback section of this article.