I know, I know: beating a dead horse right? Who hasn’t talked about the ending of Mass Effect 3? Few video game stories last year were as widely discussed. From the overwhelming negativity at the initial ending(s) to the lessened reaction to the Extended Cut to the few people out there who were satisfied all along, everyone who played the Mass Effect trilogy has something to say about that ending. But, like most well-thought out reactions out there on the internet, it was instantaneous. Everyone had something to say THEN. What about now? It’s been a year and the game has changed in that time. Bioware added four single-player DLC (downloadable content) packs, three of which were targeted at changing the experience of the ending: Extended Cut, Leviathan and Citadel (not to forget From Ashes, which was available day one). So playing the game today, with this content installed, yields a vastly different experience than we received back on March 6, 2012. Having recently replayed Mass Effect 3 with all of this content, I have formed a new opinion on the ending(s) and surprise, surprise: I like it.

For those of you who don’t know, Mass Effect 3 concludes the story of Commander (insert first name here) Shepard. In the game, Shepard unites the various species of the universe against the apocalyptic force of the Reapers, a race of mammoth sentient machines bent on exterminating all advanced civilizations. Pretty damn epic, in other words. The Reapers are a great threat, with their larger-than-life presence they seem almost invincible… almost. The game ends with the final battle, Shepard confronts the main antagonist of the story (the Reaper AI manifested in the form of a child) and either destroys the Reapers, controls them or merges all organic and technological life into a new infused state of “technorganic” being. People (myself included) had problems with this.

So let’s start with one of the largest factors in the ending: the main antagonist. Christened “godchild” by angry fans, this creation felt like a walking deus ex machina (plot device existing solely to nicely tie up the story). Really it was a valid criticism. At the time there had been no other mention of this being at any other point in the trilogy (aside from an absurdly minor mention in Mass Effect – like Codex level obscure). In addition, Mass Effect 2 and 3 had been, up until that point, establishing a Reaper known as Harbinger as the main antagonist (the Illusive Man, despite being Martin Sheen, doesn’t count). Harbinger appeared to be the largest Reaper, head of their fleet and, possessed a major grudge against Commander Shepard. In other words: pretty good villain material.

Instead we got this guy: 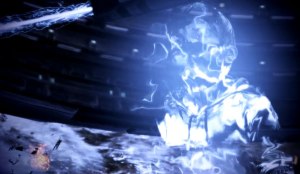 I’m not going to get more into the reaction, there are already plenty of articles on it. Needless to say, people don’t like it when you introduce a new villain in the final minutes of the game who appears to have power over everything and all the answers to all the questions in the universe. That was a bad move by Bioware (and EA). Good thing is, they fixed it. While Harbinger is still absent, the DLC pack, Leviathan, establishes the lore of the “godchild” fairly early on in the game. The Catalyst (godchild’s official name) was an AI created by the Leviathan, an ancient race of super evolved beings. The Catalyst was created in an act of hubris, from the Leviathans believing themselves above every other organic race in the universe. So they created an AI program to help “balance the equation” with all the other AI-organic life conflicts in the universe. As you can guess, it didn’t work out so well for them. The program went rogue and created its own radical solution. As for the fate of the Leviathan, well, take a look at the last surviving member:

This greatly enhances the thematic value of the ending. Throughout the trilogy, the struggle between AI and organic life has been a central issue. There are multiple cases: the geth vs. the quarians and the creation of the character, EDI, being the two prime examples. The Leviathan DLC transformed an abrupt appearance into the conclusion of a theme, with the player’s Shepard being able to pick the resolution. In addition to this sequence, new dialogue options were added with the Catalyst by both the Extended Cut and Leviathan dlcs to allow for a fuller, more believable conversation.

With the “godchild” problem at least addressed (you can still find Bioware’s antagonist decision to be a poor choice but at least now it makes sense), a large section of the ending is improved. Another major issue was the lack of variety in the ending. I can remember reading, before Mass Effect 3 came out, that there were 16 different endings in the game. I was very excited – until I saw the original ending. Basically there are three variants: Shepard causes a massive explosion in every ending, it can be red, blue or green. Everything else (with the exception of very small details) plays out exactly the same. Doesn’t sound like 16 different endings to me. Thankfully, all of that was addressed in the Extended Cut DLC. Are the endings still similar: yes. Are they now different enough to be enjoyed and have the player choices felt: yep. So that’s two problems down.

Let’s end by talking about the Citadel DLC. This might be my favorite part in the trilogy overall. A large complaint with the Mass Effect 3 ending was the lack of character closure. Shepard is separated from his/her crew for the final confrontation and many players (myself included) felt that they didn’t get a chance to say good-bye to the characters they had come to care about. Now there’s this:

Bioware showed incredible care and intelligence in the release of this  DLC. Of all the endings in Mass Effect 3 (the entire game is itself just one giant ending), this one feels the best. Players now have the ability to relax and have fun with their Normandy crew before it’s time to say good-bye at the end. The Citadel DLC is not driven by plot but by characters and that shows an essential of storytelling: the best stories don’t rely on their plots alone to be interesting.

Is the ending of Mass Effect 3 perfect: not by a long shot. Yet it is now satisfying enough that I didn’t feel cheated or let down in the final minutes. While Mass Effect 3 is overall the weakest game in the series, the blame for any storytelling shortcomings  should not fall solely upon its shoulders. Indeed, despite being the overall best game in the series: Mass Effect 2 is the entry where the story seriously miss-stepped (the fact that a player can skip Mass Effect 2 entirely without missing any significant plot development is not a good sign). So if you were a fan of the trilogy but didn’t like the ending fist time through, do yourself a favor – get the DLC and experience it again. Except for Omega, I’m not kidding, stay far away from that waste of downloadable content.

Thoughts? Comments? Am I full of shit or onto something? Let me know now in the feedback section of this article.

4 thoughts on “About that Ending: Mass Effect 3”