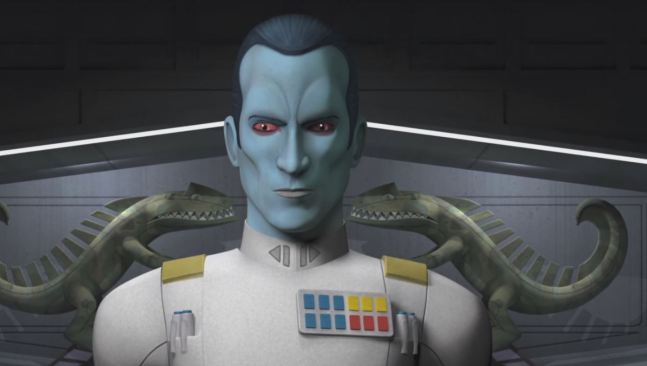 At this point, I feel my appreciation of Timothy Zahn’s Grand Admiral Thrawn is well documented. The villain first appeared in the Star Wars universe as the direct follow-up to Darth Vader and Emperor Palpatine. The success of Thrawn came from the fact that he met two conditions: 1) He had very different character traits from Vader or Palpatine. 2) He came off as no less dangerous.

Thrawn is a villain without the Force. Indeed, physically, he is not intimidating. He can fight – sure, but against a jedi it would not be a contest. Thrawn’s weapon is his intellect. He can stand in a room with Luke Skywalker and Luke will be unable to touch him, because Thrawn has calculated every scenario and anticipated every plan. The Grand Admiral’s own designs have layers upon layers upon layers of intricacy. Simply put: Thrawn has no intellectual equivalent.

I was overjoyed to hear that Grand Admiral Thrawn was to be made officially canon in Star Wars Rebels. After seeing season three (Thrawn’s introduction) however, I have doubts that the show writers are up to the task of capturing what made Thrawn compelling.

Grand Admiral Thrawn is assigned into Rebels after the unexplained departure of Darth Vader (he is hunting the rebels until he isn’t). For much of season three, Thrawn is present but passive. He observes but rarely acts. When he interacts with the rebels, one of two things happens. Thrawn “lets them go” or he turns over their handling to a subordinate…who promptly fails, allowing the rebels to escape. Neither of these courses of action paint Thrawn as a genius.

The former could have done so with appropriate payoff. Early on in the season, Thrawn captures a family heirloom of Hera’s and seems very intent on learning about her family and culture. Later on, Thrawn lets Commander Sato escape after learning the extent to which the man values family.

The problem here is that neither of these developments are revisited in season three. Thrawn never utilizes his knowledge of Hera’s family to out-think her and never manipulates Sato’s dedication to family. Nope, instead he just finally figures out where the rebel base is and attacks it. That’s it. For a master of planning, Thrawn is incredibly simple.

So…why does Thrawn let them escape? It comes off as masked incompetence rather than cleverness. Thrawn is merely spinning his failures to sound more positive. “I didn’t let them get away… I wanted this! Yeah, yeah that’s it!”

In addition, a subplot of season three centers around Agent Kallus, an imperial agent turned rebel spy. While Thrawn learns of Kallus’ true loyalties fairly quickly, he does nothing to use this information to his advantage. This despite a scene where Thrawn says he will do exactly that. I believe the line is “Agent Kallus will have far more use as a rebel spy” or something like that. But nothing comes of it in terms of payoff – Thrawn never feeds Kallus false information and Kallus eventually leaves to join the rebels. In literary terms, this is loading a gun without ever firing it. What was the point?

I credit pointing out the “Stupid Watson” syndrome to author and cartoonist, Kate Beaton. In the early Sherlock Holmes movies of the 20th century, Watson is re-imagined from a clever doctor to a bumbling sidekick with juvenile-or-senile levels of intellect. While it’s good for a chuckle, it raises a question: “Why does Holmes hang out with this guy? Isn’t this creating more work for him?” 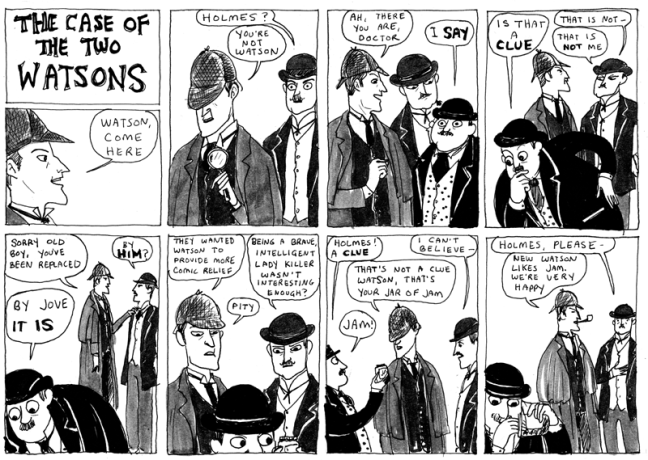 The answer is that it was lazy writing. Rather than make Holmes look like the genuine genius he is, they paired him with a moron to amplify his competence and make even mundane actions look intelligent. In Rebels, the show writers did a similar thing with Thrawn.

Thrawn continually hands off command to people who promptly screw up – much as Sherlock Holmes in the old movies continually gave Watson tasks, which he promptly screwed up. The problem here is that the genius stops looking smart when he repeatedly places idiots in charge.

It also is uncharacteristic of a mastermind. In the season three finale, Thrawn begins by overseeing command of the bombardment of the rebel base. He then hands off that command to go down to the surface so that he can accept the rebel surrender. For a macro-manager, this is an odd choice. Why abandon the position of control? It also gives the writers an easy way out. Thrawn didn’t lose the battle – Governor Price did. This isn’t Price’s first failure so why – with the situation so crucial – does Thrawn again give her command?

It would be one thing if this new Thrawn was supposed to be different from the original, but Disney has taken pains – including bringing back Timothy Zahn to write a new origin story – to recapture Thrawn’s evil genius. They want the compelling character who gave birth to the expanded universe. Unfortunately, at least in season three, Rebels writers have not been up to the task of writing genius. The Thrawn in Rebels is so far only a pale shadow of his literary predecessor – he is nowhere near as interesting and less than half as threatening. Let us hope they can turn it around in season four.