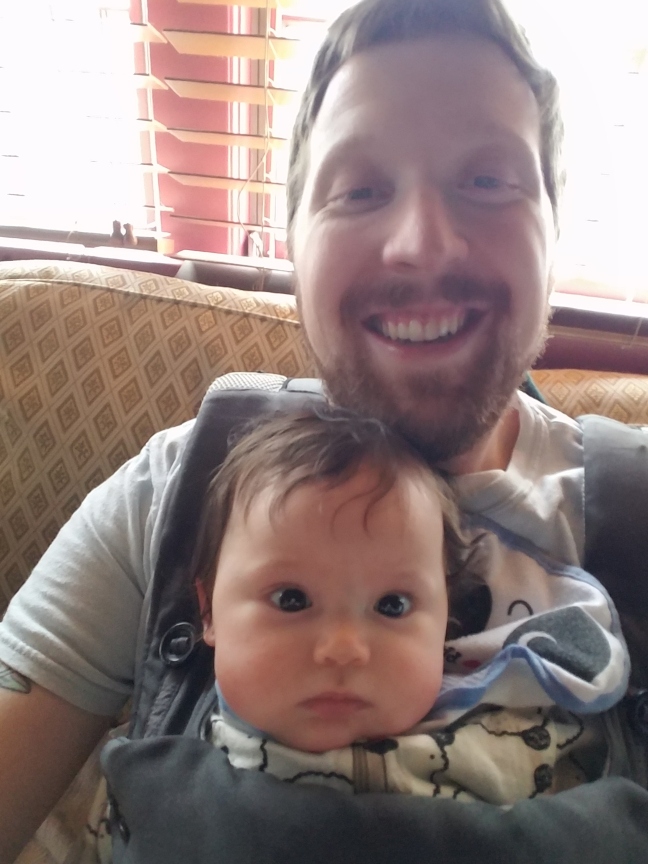 So it’s been a good bit, hasn’t it, since I last popped on to address my online audience. Crazy huh – you’d think a pandemic that crippled my social calendar would have opened up more blogging time but alas. In fairness, I haven’t exactly been idle. I’ve been lucky enough to be working a full time job, I’ve been editing Monsters Among Us (editing being a process I hate and am very slow at), creating a Beast Wars board game, and – oh yeah – helping my wife through her pregnancy and now helping to raise my recently born daughter. That’s right internet, I’m a dad now…what a thing.

Right off the bat let me say this. Having a child is unlike anything else in life (I know, I’m sure you’ve never read that anywhere else before). As we live our days, we’re often aware of milestones in our existence, right? Some of them we know beforehand – like a graduation or a move. Some of them we really only realize later – oh, this board game meetup evening turned out to be the moment when I met my future wife.

They’re always important, but nothing looms like a tsunami over your entire existence like the immanent arrival of a child. It marks a fundamental shift in priorities, and I’m not just talking about how you structure your day. No, to say it simply – you’re no longer your main priority. Now there is someone else, someone small and helpless who depends entirely on you for survival. That’s not an exaggeration. Unlike other animal species, human beings are incredibly vulnerable when we’re born and we remain that way for a good long while. Really it’s a wonder we took over the planet.

With such a monumental arrival now dominating my life, I wanted to take some time to share both thoughts and tips (yeah, cause clearly now I’m an expert, having done this six months, nothing new could possibly upend me yet again). It was a real experience having a child in 2020, the year that most everyone christened as “the worst year ever” or “a living dumpster fire.”

Right off the bat, I will say that I never cared about the gender of my child. I know there are some people out there who really wish for X over Y or vice versa. While part of me wanted a son, I am super stoked to be raising a daughter. If I had had a son, well – I’m sure there would be part of me now wishing for a little girl. It’s always a “road not travelled” scenario.

But I bring up gender because, while I don’t really think much of it, it’s immediately clear to new parents how much society does. To put it simply: It’s really weird to me how much we gender child products. I have had thought trains around and through this topic before but now, as a parent, the issue is often slammed into my face. Shirts with whales, crabs, and dinosaurs on them are suddenly boy’s clothing – yeah, because a penis is clearly required to like anything that isn’t pink or on hooves.

Heck, if it’s not pink, some people think it’s not appropriate. Likewise I guess my daughter is expected to only play with dolls and other items found in the pink aisle as she grows up. Don’t get me wrong – she’ll be allowed to play with dolls as much as she wants. She’ll also have access to action figures, hot wheels cars, Legos, and anything else she shows an interest in.

Sexism starts early…that’s a clear lesson here. From birth, human beings are placed on two separate paths depending on what’s located between their legs. I don’t want my daughter ever thinking a path is closed just because of her gender. Living through 2020 – and the immediate years prior – has made only too clear the dangers of letting sexism run rampant in society. I already know there will be at least one jerk in her life who looks down on her for being a woman. I’m determined to do my best to make sure that offender is appropriately ostracized and ridiculed – not to mention one-upped by a woman who is in everywhere their superior.

Having a Multiracial Child in 2020

Clearly though, not everyone sees these benefits. In the past year alone, former president Fuckface von Clownstick branded a centennial pandemic as “the Chinese flu” and other such racist slurs. Since then, the US has seen a tragic uptick in hate crimes toward Asians and Asian Americans. While my daughter will likely be “white passing” if she wants to be, I don’t ever want her to feel like she’s in a situation where she has to deny herself to succeed.

The world loves to put complexities into simple, often incorrect boxes, and that includes people. My daughter is part of a rising trend in multiracial children – one that I’m happy to see occurring in my lifetime. To me, it only gives her advantages. To the ignorant and the hateful, however, her existence may be seen as a threat…to something, I’m not sure what. Perhaps a simpler time when everyone could be counted on to bring the SPF 50.

If one of these hateful people had not just been president, I would be feeling more hopeful. The events of the past four years tell me that there is little racists will not do to try and cling to their imaginary past utopia. My daughter should not have to grow up in a world tainted by their bullshit. Hopefully she never has to experience anything like what some poor souls are suffering now.

I know this has come off as more of a rant than any targeted point – and for that I apologize. Let me try to conclude for now by saying that I think being a successful parent – no matter what the circumstances of your child – includes forgiveness and balancing. Like I said in the beginning, having a child shifts the priorities. That said, no one can live a healthy life if they solely exist to prop up their child. Part of this requires not seeing a baby as a burden but rather as new possibilities.

For instance, I had plenty of trips I wanted to take – including a lengthy visit to New Zealand with my wife. Well, that trip is still going to happen, it’s now just going to be for three instead of two. Oh, and obviously we’ll have to wait until she can fully appreciate it. What’s the point of visiting Hobbiton without first reading the books and seeing the films? In the meantime, I’m sure my daughter will continue to create experiences that keep her mother and I fascinated – she’s never failed to do so since being born.

I will also say this: There will be moments where you hate your child. Those dark times at 3 AM where there’s a cry when you just want to sleep for five god damn minutes! That said, you will never not love your child more than anything, even when cursing them in the wee hours of the morning. It’s just human nature. Forgive yourself for it – I’m sure it never goes away fully. It’s a long road as a parent, and they keep coming up with new abilities to drive you up the wall.

Know yourself and your limits – reach out for help when needed. That old saying, “it takes a village to raise a child” – it’s totally true. So make sure you’ve got a good settlement populated by kind and helpful people. It can only help. And forgive yourself when you mess up…because you will mess up. Hey, your parents messed up too and you’re still here, right?

I love the challenges that my daughter presents as well as our moments of joy together. Baby laughter is probably the best sound in the world. It’s a very uncertain future, coming out of 2020 and into 2021 (now with attempted coup). I would be lying if I said I was certain everything will turn out fine.

But I have never once lost hope for the future and now, with my daughter in my arms, I know it has the potential to be so, so much more incredible than the past was ever imagined to be. I love you, my little Adora, and I can’t wait to continue.

One thought on “Anxieties of a New Father”

"Diverse Books by Diverse Authors" Giving a shout-out to my first home as an author. I really cannot express my gratitude enough to Dionne Abouelela and her fine team - not to mention all my fellow authors there who made me feel at home on day one. A publishing house is judged best not by its size, but by its commitment to working with its authors to create the best books possible and, on that level, Pen Name Publishing is truly tough to beat. I strongly recommend checking out their site here.
Loading Comments...
Comment
×
<span>%d</span> bloggers like this: