In life, there are some truths that are harder to face than others. The truths that are especially hard to deal with usually focus on some life-altering aspect of our routine. The theory of animal intelligence is not new, but it is disquieting to a number of people for very clear reasons. We kill animals. We eat animals. We test products on animals. How much harder does it become to do these things when we face the reality that author Sy Montgomery calls on us to realize: animals are not just blank slates of tissue. They have thoughts, they have feelings, they have souls.

The Soul of an Octopus: A Surprising Exploration Into the Wonder of Consciousness is a 2016 memoir focusing on Sy Montgomery’s relationships with several captive giant pacific octopuses (as well as various species in the wild).  The book spans her interactions with four creatures at the New England Aquarium, as well as her introduction to scuba diving.  The intent is clear: to show the human in the alien.

In doing this, the book succeeds very admirably. Montgomery’s perspective of the outsider introduced to the octopus creates a relatable narrative that sucks the reader into the story. There is no weighty jargon to turn off the casual reader. Yet, for the most part, Montgomery also respects the nature of the octopus.

She does not ever assume what any of these creatures is thinking. The book does not get bogged down in anthropomorphizing octopuses into our fun-loving neighbors in the ocean. Her writing respects the wild nature of a creature that is not, nor ever will be, human.

In doing this, The Soul of an Octopus becomes a strong introductory book for multiple subjects. While its primary focus is on animal intelligence/consciousness, this can also be a great opener to marine biology and the life of an aquarist – as many chapters deal with the behind-the-scenes life of the aquarium.

That said, the simplistic language does occasionally work against this book. Certain phrases are read far too often as the author’s experiences lean on the repetitive side. While each octopus has a personality that is conveyed, the act of “plunging arms” into the water – the way that Montgomery primarily interacts with every single aquarium octopus – did not need to be emphasized… at least not to the degree that it was.

To keep the review short, The Soul of an Octopus is a fun read that will likely not change your life, unless the idea of animal consciousness is completely foreign to you. I would say that its subject matter is its strongest selling point. The idea that humanity alone contains the power to ponder, problem-solve, or feel happiness is outdated.

Perfect for teenagers, adults, and anyone interested in learning a little bit more about life under the waves. 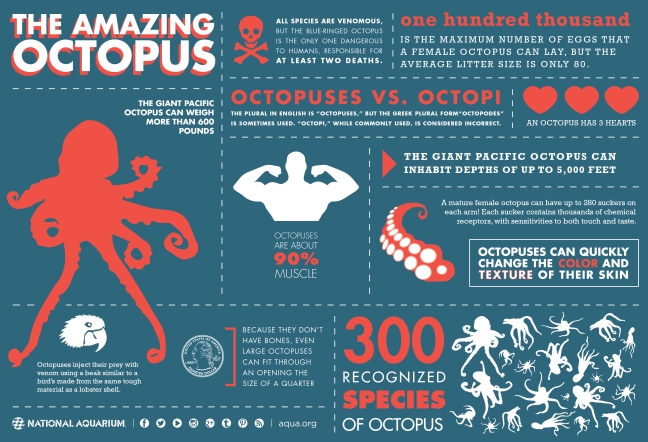 I would like to add an additional segment to this, as someone with more than average experience in dealing with giant pacific octopuses.

I too have volunteered with the New England Aquarium (it is a phenomenal experience for anyone interested – can’t encourage it enough) and had the privilege of working with Elvira, a giant pacific octopus towards the end of her life.

When I met her, Elvira had already laid her eggs. This, for the majority who probably don’t know, signals the last stage of a giant pacific octopus’ life. They really don’t hang around long (average lifespan is 3-5 years).  Elvira’s skin was starting to break down, and she was shrinking.

One look told you that this was a creature who was dying. It was only through getting to know her that I realized that she had made peace with it.

Feeding the animals was part of my volunteer duties. So every other Sunday, I would bring in some dead fish and squid to tempt Elvira. Usually, you don’t need to bribe an octopus… they’re happy to eat. Elvira, however, rarely moved from her spot at the bottom of her improvised tank.

One day though, I decided to wait longer than usual. It was a volunteer-filled Sunday and I didn’t have to run off to do the next thing. So I sat down, dangling a silvery capelin in the water, to wait and see if Elvira just needed a little more time to register the presence of food.

Sure enough, she uncurled a tentacle up to the fish. This was an unusual day, as Elvira was out in the open. She usually hid away from view among the rocks of the tank. Unlike the force described in Sy Montgomery’s book, Elvira taking the fish was as gentle as a child plucking a flower.

I watched as she cradled the capelin in two of her arms, passing in around and letting her suckers feel the scales. She did this for several moments before, and I will never forget this, handing the fish back to me.

The same tentacle that had originally been curious now held the fish up, releasing once my fingers closed around it. At this point, Elvira had not eaten in weeks. She had to be starving. Yet she was okay to let it go.

I do not pretend to know exactly what was going through her mind… but something clearly was.

It was a moment of non-human consciousness that I will never forget. I urge everyone out there who dismisses octopuses – and similar creatures – to look again.  We don’t need to go to deep space to find intelligence that is not our own.

One thought on “An Inconvenient Truth: The Soul of an Octopus (a Review)”