Earlier this month, I started a petition to the Obama Administration through its “We the People” website, a service that allows ordinary citizens to petition the Obama Administration for action on various issues. My petition (found here) asks President Obama and his administration to pass an executive action, declaring Election Day a federal holiday. Since then, I’ve gotten a good response – but there is still work to do. Yet I am aware of what I am asking, and that some people do not believe it necessary. Why does Election Day need to become a holiday? Why is this so important. Here is my response:

Everyone has their favorite holiday – whether it is shooting off fireworks on the 4th or enjoying a turkey dinner on Thanksgiving. There are some days that just seem to matter more than others. Currently, there are ten such days that have been distinguished as “federal holidays.” These include Christmas, Veterans Day, and Columbus Day. As Americans, we understand these days to be special. Would there be nearly as much dialogue on the controversial nature of Columbus Day if it were not a federal holiday?

Then there are the other holidays, the ones we must find time for – Arbor Day, St. Patrick’s Day, Halloween, and Election Day. Many of these days feel more fringe, or for children. They do not seem really that essential. But I ask: what, in a democracy, could be a more essential day than Election Day? It is nothing less than the day when America renews itself. In many ways, it is more of a birthday for our country than the 4th of July, a date that (while still important) only signified the beginning of our rebellion against England. By not including Election Day on the same level as these other crucial days, it sends a subconscious day that Election Day – and by extension elections in general – is not a big deal. Boy, is this reflected in our voter turnout.

I know friends and family who say “I don’t bother to vote, what’s the point?” I think we all do. It is sadly not uncommon in America to find many citizens who, while loving their rights, cannot be moved to defend them.

“An educated (and active) citizenry is a vital requisite for our survival as a free people.” I am paraphrasing the thoughts of founding father Thomas Jefferson. I am always hesitant to quote the founding fathers (our apply anyone’s view from hundreds of years ago to today) but I feel like this sentiment has aged very well. Democracy fails when too many of its people our silent.

By making Election Day into a federal holiday, the federal government will in fact be saying: “Vote! It’s important! We’re giving you time off to do it!” Rather than their current “meh” response. Will this make everyone rush to the polls? No – I am not naive. I know very well that a few will stay at home or do whatever on voting day. That said, it would be as equally naive as to say that this will no positive effect on voter turnout. America is full of all different types of citizens, and the ones that wish to vote should be given a chance to do so.

One of the first negative responses to this proposition that I heard was “most of the states already give time off. A federal response is not needed.”

The first part is true. Most states do have a system in place. Most but not all. The state of Wyoming has a population of 544,270 people. At this number, it is currently the state with the smallest population. That means, that even if the coverage was 49 out of 50, with Wyoming being the only state without a policy, nearly half a million people would not be given time off to vote. In the freedom-loving democracy that is ‘Murrica, this is completely unacceptable. Everyone should have a right to time off to vote, regardless of what state they live in.

While I applaud the states that have taken initiative, this is also not just a states issue. Elections also include federal employees (President, Senators, Congressmen). There needs to be a response at the federal level to account for this. We’re not just taking time off to elect mayors and the city council – we’re electing the leader of our federal government.

People don’t need another day off

Yep, you caught me people who responded with this – I’m just another lazy American who wants a paid day off. Curses, thought I had you fooled with this whole “democracy matters” ruse. You caught me, I’m just as self-serving as your negative-as-possible dismissal of this suggests.

Except not at all.

But let’s tear this to pieces fully. Even if this was purely the push for more time off, and not reflective of contributing to a solution to one of America’s larger problems – we don’t need more time off – really?

Study after study has suggested that Americans are indeed overworked and that more vacation time would in fact boost productivity rather than hamper it. The fact is that America appears to be operating on an old – and frankly dour – business model. When Japan (one of the hardest working nations on the planet) says it’s time for new thinking and more time off, we should probably be listening. Heck, Germany has one of the best economies on the planet – and they are loving their months of down time.

So, while this is not really relevant to my greater point of Election Day being a vital day off to help stimulate democracy, I wanted to address it too. It is not “laziness” to ask for a day off to vote. Have some faith in the majority of your fellow Americans.

This is one of the greatest crimes in our nation that has gone largely unaddressed. The fact remains that certain individuals in our government, largely on the Republican side of the aisle (not trying to be partisan – it’s true) have put blockades in place to stop many people from voting. Most of this is done against minorities. This is cowardly, and those establishment individuals on the GOP side are nothing short of criminals. By the way, before democrats cheer too loudly – most (not all) is on the GOP. Some democrats do this too. 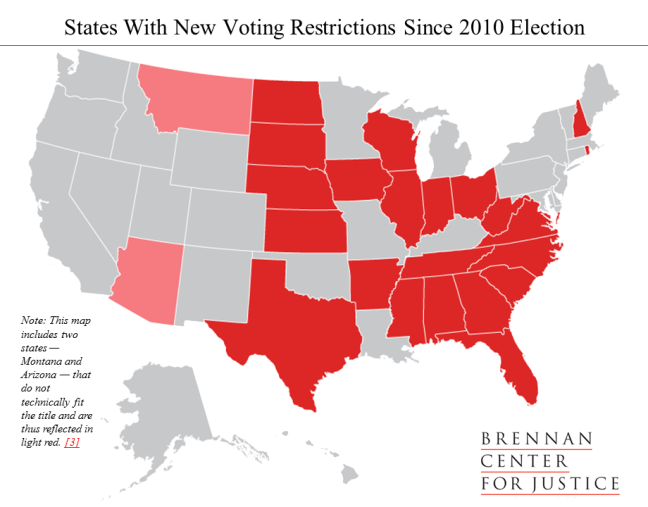 It is a cowardly act to attempt to limit democracy for political ends, I don’t care which side does it.

Making Election Day a federal holiday will give people more time to vote, and more time to overcome any obstacles set up to slow/stop their voice from being heard. Many voter suppression tactics revolve around creating hoop after hoop to jump through before your vote can be cast. Say you’re a poor woman whose been working from 8 to 6 and the polls close at 7 – you arrive at 6:30 to vote but whoops, you don’t have your driver’s license, passport, and birth certificate. Guess you’ll have to go home – oh, and what a shame – the polls will close before you can get back.

I understand the need to be on alert for voter fraud, I do. Yet there is no massive case of voter fraud on record, but there are many cases of voter suppression. Will turning Election Day into a federal holiday stop all these completely? No – but it will help.

At the end of the day, this is just a step. Obama declaring Election Day a federal holiday will not give everyone a day off automatically. The states can still decide whether to give that day – or another day in its place – to people to have time off. Yet this would be a significant move towards letting Americans know that their country expects them to vote.

Please sign my petition and force the Obama Administration to act. This is democracy, your voice matters.

One last thing, to give credit where credit is due: This was inspired by the campaign of Senator Bernie Sanders and his desire to create a Political Revolution where ordinary citizens get more involved in their government to fight against corruption. Let’s take our country back. I’m encouraging everyone to vote, whether you agree with me or not.