Judge (V):to form an opinion about (something or someone) after careful thought

: to regard (someone) as either good or bad

If there is one dominating philosophy in culture today it is “don’t judge me bro.” People hate being judged by others, and with good reason. When one examines the prejudice of the world, one sees that a lot of it comes from unfair judgment. Gays can’t get married, why? Religion judges it as not right. A woman should not be president, why? (some) Man judge woman as unfit for president. Prejudice, prejudice, prejudice. Well, thank god the new movement is away from judging… right? Turns out not really. When one examines the world today, one finds judging alive and well. From food choice to lifestyle choice to opinions of people we will never meet: we judge everything. I know I am guilty of it.

But is judging necessarily a bad thing? Well if you’re not judging… then it can’t be bad. Judging, like many actions, exist without any connotation. To label judging as good or bad is in itself to create a very restricting label. It’s wrong to judge. Can there be a more ironic statement?

Human beings (myself included) are not as perfect as we like to pretend these days. Look no further than the recent news regarding the new Daily Show host, Trevor Noah. Well, I’m sure you’re as shocked as I was to learn that Noah is a human being and has made a mistake in his years of life. I know, it truly is front page material.

It is simply silly to look at all the lists on why you shouldn’t judge others. I can’t get over it. A list that says you should not judge, because judging is bad (what?!). To be fair, they’re not saying all judging is bad, they identify primarily the judgment of other people. Okay, fair enough. Let’s look at some images:

Okay, hard to look at that without forming some kind of opinion. Let’s try this: 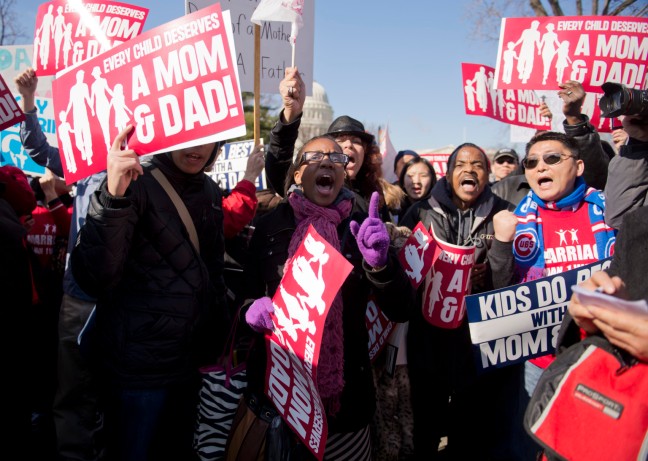 Odds are, you just judged one group of people, even if it was just for a second. I know I did. Let’s look at it though, on the surface it seems straightforward: the group on the top is better because they simply want equality and what is even that argument from the group below? But such a judgement is quick and shallow, as most online writings will tell you. I don’t know where the people in the lower list came from. I don’t know how they were raised. I identify with the people in the top picture because I want equality. In a sense, my act of judging the two pictures is simply a judgment on myself. I support one set of ideas and not the other.

Hitler did a horrible thing.

Hitler did a horrible thing and he’s a bad person because of it.

I feel that there is a profound difference in these two statements. In the top one, I identify that I don’t agree with Hitler (yay me). In the second, I state that I don’t agree with Hitler AND I label him as something different from me. I’m going to guess I’m not alone in being someone who doesn’t think of themselves as a bad person. I feel that, by putting Hitler in the “bad person” label, I have said that I am not like him.

Well… that would be great except I am like him. I don’t mean in terms of political and moral alignment, but I am a human being. I was raised in a family, in a country, and with a set of values. Hitler had a family too. He did not spring from the womb mid-goose step. This does not mean that Hitler is above reproach. Indeed history has already judged him harshly. This judging is not bad. I think I speak for most of the world when I say that no one really wants to see another person do what Hitler did. Does most of the world not wanting it make it right? I do not know, questions for another day.

Regardless, since I deem myself (and myself only) incapable of not judging others, at least to some extent, I feel that the dialogue on judging needs to alter. I know I am not the only one out there who admits to judging. I mean, we can all admit that excessive judging of any kind is bad… as is excessive anything. That is what excessive means.

Personally I do not feel that judging to learn more about oneself is a bad thing. To look at another human being and ask “would I be happy if I were more or less like them” is not the worst question ever to entertain. That said, I feel like labeling, like labeling Hitler a bad person, is excessive judging and goes too far. We reduce the other person to something less than us, and in that way we never look at ourselves.

Likewise, the last type of judging I will touch on is tough love. This means that we act harshly towards another to help them on. Hmmm, kinda getting into dangerous territory here. Tough love almost sounds like it implies that we know more than the other person. Well, this is not innately negative because sometimes… we do! A parent knows more than the child (usually). A teacher knows more than the student (usually). To say that the idea of tough love is wrong is to say that we can learn nothing from the other people on this planet. While it is true that no one will ever know you better than you, it is also true that no human being is an island.

I will admit that, as well as I know myself… I do not know myself completely. That means I do not know fully what I am capable of, I do not know fully who I am. It is in human nature to perceive ourselves as “good.” Most of us want to be, I know I do. I want to feel like I am always doing the right thing, even when I might not be. In that vein, it is good to have someone else inform me of my shortcomings, even when I don’t ask for them. I don’t know about you but I probably do not ask for what others perceive as my shortcomings nearly often enough.

I will volunteer this: look on others and judge as often as you would like them to look on you. Hmmm, I believe there is a famous book that says something similar. It just seems silly to view judging as this evil action… while judging so often on such a daily basis. Maybe we need to reconsider the idea of weighing people on the scale. Let’s just make sure we put ourselves on there too if we’re going to.