Last year saw the end of one of the larger video game publishers, THQ. The company was responsible for such hits as the Saints Row series, the Darksiders series, and the Red Faction series. Further proof that producing successful games does not guarantee longevity in what can only be described as a cutthroat industry. When THQ went under, two enormous titles, South Park: the Stick of Truth and Saints Row IV, were still in development. The public was excited for both of these titles and, luckily, each found a home with a new publisher. South Park: the Stick of Truth was released courtesy of Ubisoft, while Saints Row IV found new life with Deep Silver. THQ’s last great games would be live to be played be the public. What makes these two titles very interesting, however, is the fact that they deal with similar subject matter. Both are games designed to parody other games. Well, as it happens with any two like products, the question becomes: which one is better?

To begin, let’s examine the core games that each title is parodying. South Park: the Stick of Truth was molded to make fun of the traditional RPG (roleplaying game), where a silent protagonist teams up with a team of other, computer-controlled adventurers to complete an epic quest. Think old school Final Fantasy for this one. Heck, just look at how Canada looks in the game:

The game also draws attention to the illusion of choice. There is one sequence in particular where the player character is ambushed by elves (kids dressed as elves). The elves offer a choice: fight or come quietly. Immediately after, one of the elves mentions that the fight is pointless and that the player will be forced to come along no matter what. There are several other instances throughout the game where the player is offered “choice,” and each one unfolds in a similar manner.

I have already written and article talking about the Saints Row series but, just to reiterate: this is, at its heart, a spoof of the Grand Theft Auto series. Saints Row IV marks a large departure as series such as Prototype and Infamous become the primary draw for gameplay. While the core game focuses on spoofing those two series, Saints Row IV draws from several other key sources. The Mass Effect trilogy is evoked in two ways. First, Keith David is in the game as… Keith David. The character serves as a comedic stand in for his Mass Effect character, David Anderson. 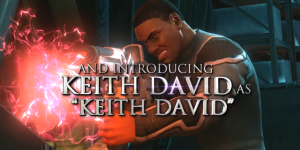 In addition, Saints Row IV pokes fun at Bioware’s relationship system. The idea that your player character is irresistible to everyone else and can have sex just by talking to another person. Where Mass Effect restricted it to one or two partners per playthrough, Saints Row IV allows the player to have sex with everyone in their party (minus Keith David), including one machine. This pokes fun at the idea that the only reason any player ever completed a relationship in a Mass Effect game was for the sex scene “reward” (there will be another, more serious article on this) at the end.

While both games are intelligent parodies, it is Saints Row IV that pulls ahead with simply better gameplay. It is the more fun game to play. While South Park: the Stick of Truth is hilarious, it is only meant to be played a certain way. The player is encouraged to directly complete quest after quest. Wandering (an element central to most RPGs) is discouraged. This is a short game with only a set amount in it. The repetition of things to do becomes apparent to any player who chooses to explore and (uselessly) grind against enemies. While this isn’t a huge knock against South Park, it is a limitation that Saints Row IV does not have (at least not as glaringly).

I feel that this difference is best showcased by comparing game maps, have a look:

Another area where Saints Row IV excels is the intelligence of some of its make-fun segments. For example, there is the moment where Saints Row IV switches to a 2D beat ’em up making fun of Streets of Rage (the segment is called Saints of Rage I believe). It is short and fun and, most importantly, easy. The joke does not overstay its welcome.

South Park: the Stick of Truth is not so smart. Any gamer out there can tell you about the frustrations of button mashing sequences. They are as the name suggestions: hit a button as fast as you can and hope it is fast enough to work. Not big on the skill but high on the tedium. On one level, the South Park game makes excellent fun of this. There is a completely voluntary sequence where the player character can use the bathroom and the player must button mash to complete the task. Fun, easy, and short – all three things. There are also several sequences where the player must button mash to complete boss battles or advance the story. These are not always fun or easy and come dangerously close to exactly copying the games that they are trying to make fun of.

One last point that I will harp on: glitches can ruin games and there are far more game ending glitches in South Park: the Stick of Truth. I encountered one such glitch and the game was nearly ruined for me. I will not dive into this further as I am planning to do a full article on the game production patterns over at Obsidian (the developers of South Park: the Stick of Truth). Suffice it to say, this is not the first Obsidian game to be held back by technical slip-ups.

For players seeking a humorous game experience, neither title will leave you disappointed. However, there are simply more funny jokes in Saints Row IV that are done better. Trey Parker and Matt Stone are geniuses in the world of cartoons, but the good folks over Volition, Inc. have the edge when it comes to properly enabling comedy through video games. There are advantages to being more familiar with your craft.