Last year, the city where I grew up suffered a cowardly and inhumane attack from two individuals. To say that it was a shocking day would be an understatement. We all see pictures and hear of the war, terrorism, and horror that goes on around the world but: it is different when it’s your city, when you know that your family and friends were there. The Boston Marathon bombing was nothing short of a tragedy. If there was one silver lining, however, it was how everyone responded. I wasn’t home at the time, but I saw the things happening and many of them made me proud of where I come from. There may have been no more powerful moment than this:

Two days after the bombing, that happened at a Boston Bruins game. A simple gesture made powerful in the number of people performing it, and through the emotion that it conveyed. It was a genuine moment, there really is nothing more accurate than that. Boston galvanized itself in the days following the attack and everyone wanted to show support. As this is America, it was done with merchandizing: 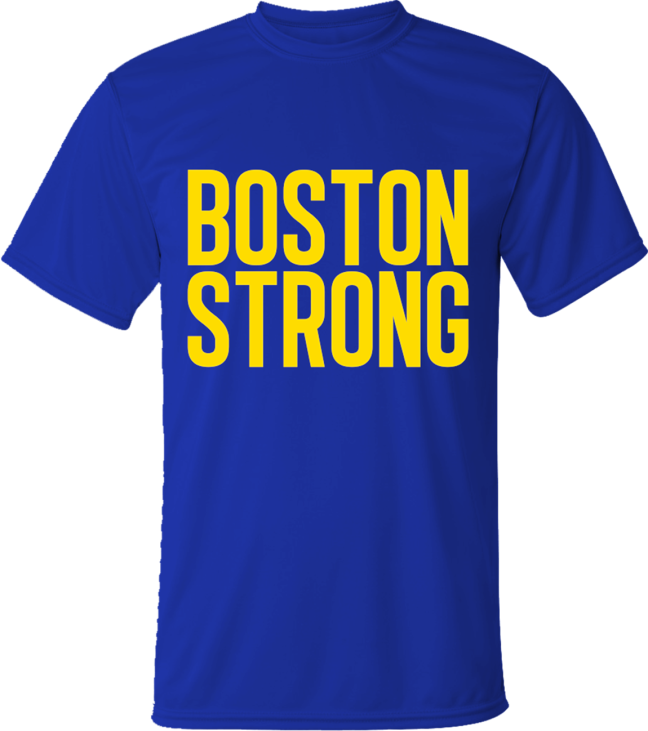 For the record, the official Boston Strong website is connected to the One Fund, the charity set up to give direct relief to the victims of the Boston Marathon bombings. If you show your support through them, you will actually be contributing to a good cause. However, and this is really sad to say, there are many other “Boston Strong” products out there with no affiliation to any charity.

It is difficult to fully argue against these products, because some of them do help people. Yet when the bombings happened, I remember the reaction of my city; I remember the message being delivered: “this will not define us.” There was a power in that message because it told the criminals involved that they had failed. They would not get famous – they would get arrested and the city would move on. Obviously, we remember those whose lives were affected, and in some cases cut brutally short, by the bombings. But is this really remembering them?

This is marketing. Boston Strong has become a brand, and to me that is sad. No one wants to feel powerless, and the bombings made us all (everyone in or who knew someone in Boston) feel that way. Yet I must be clear: buying a t-shirt is not taking power back for Boston. When those runners involved continued to run to donate blood in the minutes directly following the attack: that was action (that was god damn heroic). If you do no research and just buy the first thing that says “Boston Strong” on it, you’re not acting, you’re following.

Support Boston, the products say, but who is really being supported? There is a wonderful way to eliminate the middleman when wanting to give to those in need: find the charity and donate directly to it. Ah, but then who knows that you did something? It is a human feeling, to want to be recognized for doing good. It is this feeling that companies are capitalizing on. Rest assured, even though they might have started it with the best intentions: they are now driven by their wallets.

That was genuine. Ortiz knows he’s a role model but as someone involved with Boston, he… well he expressed what we were all feeling back then. He showed his support, and because he was famous, everyone got to see it. Then these happened: 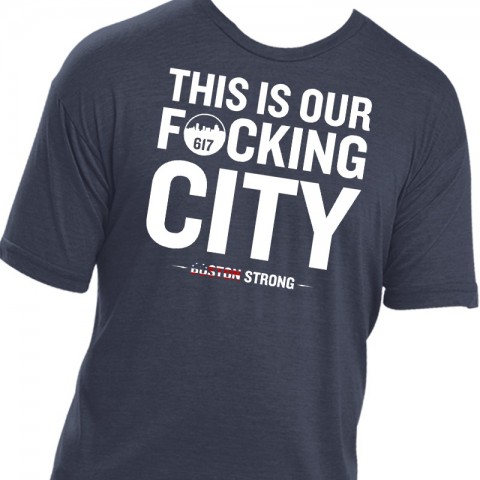 To my knowledge, with the research I have done: these are not connected to any charity. No one, besides the wearer, feels better with this. I’m not knocking that feeling. Especially after the bombing – everyone needed a pick-me-up. Just be informed, don’t wear this and think that a difference is being made, It’s not. Someone made money, that’s about it.

Next Monday the first Boston Marathon, since the bombings, will be run. The city will shut down: that’s how many people are going out to support it. I will be there, I know that, but I won’t be wearing anything that says I support the city. I will go out and support the runners and have fun and remember. The bombing defined us: but if we’re careful, it can define us in the best way.

PS – To the man (never naming you) who committed that hoax last night in Boston – FUCK YOU. Here is a Boston charity site, for those out there who are interested.