Yesterday, as I was reading through the news avenues of the inter-webs, a story concerning an issue at Concordia University came to my attention. The issue was this: censoring song lyrics in regards to political correctness. The song lyrics in question weren’t… well, if you were a white male they were fine! There were two pieces, a thoroughly researched impartial view of the evidence and an attention-grabbing, opinion-driven editorial. As is always the case: more people were talking about the editorial (I love how much the average person fact-checks!). Anyways, I begin with this to address a larger issue closer to home: the Washington Redskins.

For those out there who don’t know, the Washington Redskins are a professional football (NFL) team that operates out of Washington D.C. They were founded in 1932 (back then known as the Boston Braves) and have been around ever since. So what’s the issue? Well, if the name hasn’t already tipped you off, have a look at the logo: 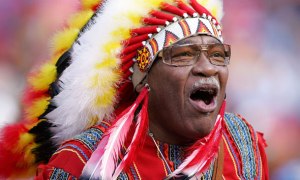 The Washington Redskins are not unique. They represent one of several professional sports teams (looking at you, Cleveland Indians) with, frankly, poor choice in their name. For the sake of today’s article: let’s focus on Washington. What’s the big deal? Who cares if they are called the Redskins? Indeed a very recent poll (2013) showed that 79% of Americans felt that the name was fine and that Washington should keep it. Well if the majority thinks its the right thing to do than who cares?

This is why I hate the term “political correctness”, more often than not it can be written as “what group(s) are okay to make fun of, what groups are not?” Let’s try some name suggestions: the Delaware Dykes, The Hampton Housewives, The Philadelphia Faggots, The Notre Dame Fighting Irish (this one is real), and the Nebraska Negroes. Were those names offensive: yep. Okay, new question: why the f*ck is the name “Washington Redskins” okay?

The term “redskin” began as a racial slur against Native Americans back when European settlers were still colonizing America. It enjoyed it’s height of use in the 18th and 19th centuries before fading away (no longer “politically correct”). At it’s base, the word is a racial slur (red skin) but was also used denote the “primitive” dress and culture of the Native Americans. Essentially this word is a two-for-two, debasing someone based on what they look like and how they live (aren’t words great?).

I guess the best way to put it is this: if you were walking home alone one night and saw a stranger of Native American descent walking toward you, would you feel comfortable calling out: “How’s it going, redskin?”

Apparently, 79% of Americans think it’s okay. Let’s count some numbers. Right now there are roughly 313.9 million people in the United States. That’s estimated, the last full census was conducted in 2000. Of that number, 2.8% of the entire population identified as “American Indian”. They couldn’t influence a poll if they tried.

I’m going to guess that most of that 79% were not “American Indians”. Makes a bit more sense now, doesn’t it? Do I personally (as a white male) really find the word “redskin” offensive to me. No. It doesn’t deliver any kind of impact. However, that whole wonderful notion of progress dictates that, for the greater societal good, I look beyond my own apathy to empathize with other people (some of whom do not share my cultural background). This is what needs to happen with the Washington Redskins.

Human beings do not like to change traditions, even if the tradition is horrible. Take a look at slavery, one of the worst crimes in humanity: 625,000 people (in the United States alone) had to die in order to lose that tradition. That’s not to say that slavery didn’t exist for over 200 years (again, just in the U.S.) before people finally acted. Was it worth it: yeah, racism still exists but slavery is gone. That’s progress.

Luckily, there is no institution remaining that is as overtly inhuman as slavery. However, people are still human. A lot of us are way too okay (and self-justifying) about treating others in really unfair and cruel ways. I include myself in this bashing, so I’m trying not to preach.

My point is this: nothing will be lost in changing the Washington Redskins’ name. At the end of the day who cares, it is the name of a freaking football team. So IF there is even a chance that it might be offending say, a whole group of people, why not change it? Think of the merchandising opportunities (you greedy bastards). Think of what one small gesture like that might mean to the remaining Native American community (sorry for the whole ‘murdering your culture thing’, I guess we can change our sports teams’ names. You know we spoil you). Think of it like this: “tradition” or “the way its always been” is one of the poorest, most self-justifying excuses there is for: we don’t want to change, even if it bothers other people.

For the record: I don’t think the Washington Redskins organization is racist or bigoted in any way. The driving emotion of this issue is apathy. Who cares if a few Native Americans write letters and complain? The vast majority of the non-Native American population doesn’t mind.

Let’s be more than “politically correct” on this one.

2 thoughts on “Politically Correct: The Issue of the Washington Redskins”