Just going to give a head’s up that this article will be a very complete character examination of this man below (this includes full plot breakdown and ending spoilers): 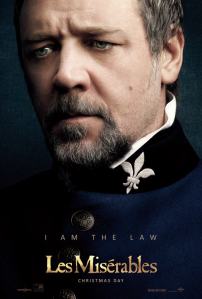 Oh my god, we’re talking about Russell Crowe. More specifically I’m going to defend his performance of Javert in the recent musical hit, Les Misérables. Many people saw this and many people liked it. The film was nominated for eight Oscars; winning three of them (Anne Hathaway’s well-deserved win as Best Supporting Actress among them). So in short, Les Misérables was a critical success. There was only one performance that a lot of people took issue with. Yeah – our boy, Russell.  Many critics found Crowe’s singing to be… less than stellar. Well, when The Onion devotes a video to you, less than stellar may not be adequately summing it up:  http://www.theonion.com/video/russell-crowe-praised-for-stunning-portrayal-of-ma,30839/. Youtube even had Hitler weigh in on Russell Crowe, both as an actor and as a singer (warning, Hitler uses naughty German language): http://www.youtube.com/watch?v=Xt-m9dT_jwc.

Okay maybe that last video was overkill but point is: people, in large part, hated Russell Crowe in Les Misérables. He was labeled as the one awful performance amidst a sea of gems (Hathaway, Jackman, etc.). Now I have no comment on Russell Crowe as a human being (never met the guy) but I feel like he has been treated too harshly in regards to Les Misérables. Crowe’s performance in the film isn’t only one of the strongest, it would probably rank as author Victor Hugo’s personal favorite as I believe it is the truest performance to the character that has been portrayed thus far.

Before I get into Javert, a quick summary of the Les Misérables plot for those who may be unfamiliar: Wolverine steals a loaf of bread and Gladiator sends him to prison. After prison Wolverine goes on the run and adopts Catwoman’s daughter from Borat and Bellatrix Lestrange. Gladiator continues to pursue Wolverine but everyone runs into a 99% rally and a lot of people are killed. It may be comical but it is strangely accurate. Anyway, couldn’t resist having this in here. Back to Crowe’s Javert.

As said in the above poster, he is the law. That’s putting it pretty simply. In describing the character, many people have labeled Javert as a legalist. I’m going to use Wikipedia’s current definition of legalism, as I feel it is very adequate: “usually pejorative term referring to an over-emphasis on discipline of conduct, or legal ideas, usually implying an allegation of misguided rigour, pride, superficiality, the neglect of mercy, and ignorance of the grace of God or emphasizing the letter of law over the spirit. Legalism is alleged against any view that obedience to law, not faith in God’s grace, is the pre-eminent principle of redemption.” Woah, that does sum up Javert pretty well.

Okay so that’s great about Javert but people had problems with Crowe’s performance. In particular he was called wooden and his singing style was described as awkward and not as emotionally free as the other characters. I would agree with the latter part of this criticism but I would not agree that it is criticism. Another way to put that: I believe that Russell Crowe’s singing style is completely intentional (just not comically bad as The Onion suggests).

It all starts if you accept Javert as a strict legalist, which I do as it makes full sense with his character. Now while Javert may be strict in his philosophical beliefs (as he is with everything else) there becomes present a very clear and dividing doubt within the character. Javert sees the world’s morality in terms of black and white: Jean Valjean stole so he is a bad man, the revolutionaries are rebelling against order so they must be bad people – that sort of thing. Problem for him is that Les Misérables is full of gray area. Yes, Valjean stole but he is also a noble man. Yes the revolutionaries resist the law but theirs is a noble cause. Javert is not stupid, he sees all this an it baffles him. Essentially Les Misérables can be watched as the slow breaking of Javert’s mind.

You see this in Crowe’s performance. People have described it as a detractor. The fact that Crowe’s Javert has an almost constant expression on his face (the one pictured in the poster). He never looks certain as many people feel that Javert should. This is true, he does not look certain. He appears in conflict. While Javert is the face of the law, sworn to uphold it – Crowe’s Javert very clearly does not agree with the word of the law, despite his insistence otherwise. It is a psychological condition of denial that gives the otherwise villainous character of Javert a real human depth.

There is a sadness that Crowe imbues the character with that makes the audience feels for him. Look at that picture above. I’m not lying, that’s the only time in a nearly three hour film that Javert cracks a smile. In everything else: grim uncertainty. Yet if the fact that Javert is not happy in his work does not do enough to instill a sense of sympathy. I invite a contrast, look at how comfortable he looks above. Okay, now look below:

Russell Crowe portrays Javert as more than out-of-place in this scene. There is genuine horror and dawning realization upon his features. It is only at this point in the film that Javert’s last illusions of black and white crumble away. That medal, which has been displayed so proudly on his chest in previous scenes, guess what is the first thing Javert does with that medal afterward:

Javert pins his medal on the dead body of the boy who identified him as a police inspector. For that crime, Javert was supposed to hang. The only reason he did not was through the actions of Jean Valjean.

Okay, you’re saying, right now I’m saying there’s a lot of strength in the character of Javert but I’m not doing much to showcase the strength of Russell Crowe’s performance. Audiences are fine with Javert, it’s Crowe that they have the problem with. True enough but while I have been focusing on Javert’s character, I have been doing that to highlight the pains and constraints by which he is acted. Javert is not a character who will give a tearful rendition of his thoughts and emotions. Well, he does do that once – right before he kills himself. Yeah, there is emotional repression. You know how that looks? Watch the subtleties of Crowe’s acting. Heck, just look at the way he carries himself on the pivotal balcony scenes:

Les Misérables is not a subtle movie. Really Javert is the only character in it who is not comfortable in self-expression. When you consider that, his character must then have a completely unique style of portrayal. Yes his performance should stand out, but it is not wooden. The Onion was right. Russel Crowe should be commended on his performance. It is the perfect portrayal of a man who walks the line between law and chaos, right and wrong, and what happens when he finally stumbles and falls.

Russell Crowe’s own defense of his performance: http://www.youtube.com/watch?v=vnAhVVPUdGU

Thoughts? Comments? Am I full of shit or onto something? Let me know now in the feedback section of this article.

6 thoughts on “In Defense of Russell Crowe's Javert”